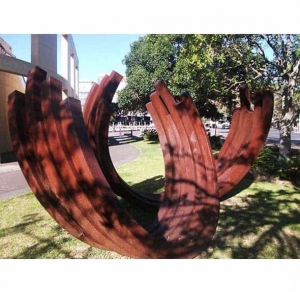 Throughout his career, Bernar Venet has made pioneering contributions to the discourse of sculptural practice and has emerged one of the most significant artists of his generation.

Notable highpoints include a solo exhibition Venet à Versailles at The Palace of Versailles, Château de Marly, France (2011), following which the French postal service issued a commemorative stamp of the artist’s 22-metre Vertical Arcs that were included in the exhibition.

In 2012, a major retrospective of his work as shown at the Müscarnok Museum in Budapest, Hungary. A biographical note on Bernar Venet now included in the Larousse Dictionary, which became available to the public in June 2012.

The same year, he was approached by car luxury manufacturer Bugatti to design a unique, one-of-a-kind Bugatti Veyron Grand Sport. He is the recipient of several awards including the International Julio González Sculpture Prize (2013), a Commandeur dans l’ordre des Arts et des Lettres by the Minister of Culture in France (1996), Grand Prix des Arts de la Ville de Paris (1989) and in early 2005 Venet was awarded France’s highest decoration, Chevalier de la Legion d’Honneur, for his enhancement to the reputation of France through arts.

In 2012 a Venet’s tallest work 88.5° Arc x 8 (27 metres tall) sculpture was permanently installed on the Gibbs’ Farm near Auckland.