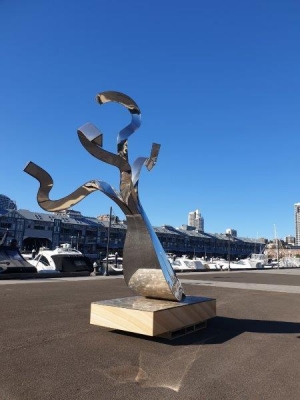 which left him with a mobility disability. However, this did not stop him holding several successful exhibitions at the Picadilly Gallery in London and the Barone Gallery in New York before returning to Australia in 1955.

From 1972 to 1983, Flugelman was a lecturer at the South Australian School of Art  and subsequently became head of sculpture. During this period he completed some of his most famous work, in particular Festival Sculpture 1974, Spheres 1977 and Cones at the National Gallery of Australia in 1982. From 1984 to 1990, Flugelman was senior lecturer and fellow at the School of Creative Arts, University of Wollongong . In 1991 he was made professorial fellow at the University of Wollongong. In 1995, he received an honorary Doctorate of Creative Art (Honoris Causa) and in 1997, he received the Australia Council, Visual Arts/Craft Fund, Emeritus Award. In 2008, a hard-bound survey of his post-1968 sculptures, primarily his stainless-steel work, was published by The Watermark Press. It was written by Emeritus Professor Peter Pinson (whose Sydney art gallery represented Flugelman), with photography by David Perry. The book was designed by Harry Williamson. At the time of his death in February 2013, Flugelman resided at Bowral in the Southern Highlands, NSW.