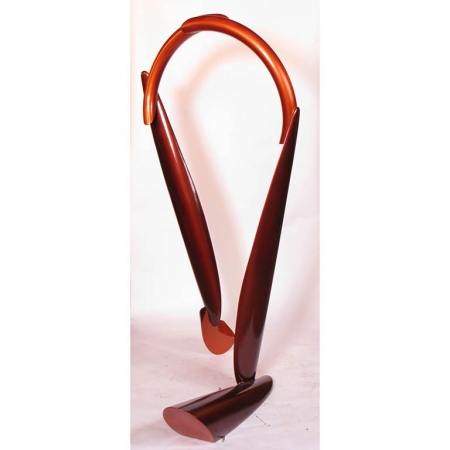 Bruce Radke, sculptor, was born in 1950 in Brisbane. Radke’s early career in geology saw him travel the Kimberleys, in Australia’s Northern Territory, and north-western Queensland, where he worked as a geologist for four years beginning in 1972. Radke then attended the Rensselaer Polytechnic Institute, Troy, New York, as a doctoral candidate in geology. Receiving his Doctorate in 1982, he worked for four years as a marine geologist in the Great Barrier Reef in northern Queensland, where he began exploring painting and sculpture.

In 1983, Radke completed a one-year Sculpture Workshop at the Canberra School of Art. He resumed work as a marine geologist in the South Pacific with the United Nations Development Program in 1984, before devoting three more years at the Canberra School of Art, where he forged a new career as an artist. Taking residencies in Kuala Lumpur and Malaysia prior to establishing a studio in Pialligo, ACT, Radke exhibited at the 1988 ‘Floriade’ Festival, Canberra, and at the ‘Atelier Sarawak Woodcarving Exhibition’ in Kuching, Malaysia.

Radke maintained a position as a tutor at the Canberra Institute of the Arts from 1988 to 2007, while showing in over 70 group and solo shows around Australia. His first solo exhibition was held at Meridian Gallery, Melbourne in 1994. Radke has had a number of commissions; his first, Cita, was completed in 1988 for Market Square at Caroline Chisolm High School. More recently, in 2005, he completed a sculpture for private commission, entitled Sonata.