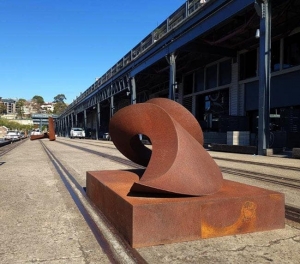 Matthew Harding was an internationally recognized Australian artist having completed well over 50 major public sculptures here and abroad.
Matt was engaged in a diverse practice spanning sculpture, public art and design. From his workshop in the Central Highlands of Victoria Harding designed and fabricated large-scale works exploring structure, natural geometries and the presence of form in the landscape. His work is inspired by a keen interest in science, mathematics, engineering and a desire to learn through the process of making.

Harding first studied painting and printmaking at the Hunter St School of Art, Newcastle (1984-5) and in 1995 he received his Bachelor of Visual Arts (1st class honours) from the School of Art, ANU, Canberra. His initial trade experience coupled with visual arts training has led to many crossovers in media and areas of practice.

He lectured at the Australian National University and University of Launceston and participated in cross-cultural symposia and collaborations in Japan, Canada, Cambodia, New Zealand, Sweden and Easter Island. In 1998 he was the recipient of a Churchill fellowship.
Harding’s work is part of several public and corporate collections nationally and internationally, including the National Gallery of Australia; Artbank; Australian National University, ACT; The Boston Museum of Fine Art and Cincinnati Museum of Fine Art , USA; The Royal Collection, England; Inami Sculpture Park, Japan; Vanuatu Parliament, Vanuatu and Wing Tai Holdings, Singapore.