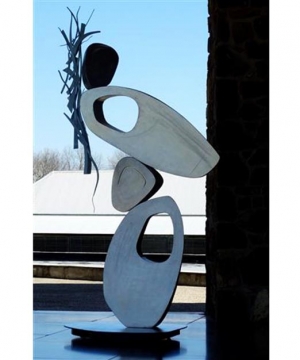 Artist Sculptor
Sculptor Dónal Molloy-Drum was born and raised in Dublin, Ireland. Influenced as a teenager by the assemblages of English sculptor Bill Woodrow he pursued this interest and studied fine art at the Crawford College of Art and Design in Cork. Here he developed his love for steel and the workshop environment and was influenced by visiting artists such as Dorothy Cross, John Gibbon, John Behan and Vivienne Roche . Majoring in sculpture he graduated in 1988.
He has also lived and worked in London, New York and Melbourne, primarily at his arts practice but also in the field of community arts and in the building industry.
Dónal migrated to Australia in 1997 and became an Australian citizen in 2011. He works at his Banyena studio in the Wimmera region of Victoria, is a regular exhibitor, with work in public and private collections worldwide, including Microsoft Dublin, South Dublin County Council, the Australian Air Force Canberra and Horsham Rural City Council.
Favouring building materials, wood, plaster, concrete and stainless steel to create polished abstract sculptures he continues to push these materials and 2018 will see him exhibiting new work in Melbourne and Sydney.

The vast space of the Wimmera region has been pivotal to the direction my work has taken over the years. The sharpness of light, shadow and silhouette has drawn me to the small detail and simple shapes that stand out reflecting the still and empty spaces of this landscape.
My work has always been concerned with, traditional sculptural aspects of form, volume and balance. Living in this environment these traditional aspects have become even more prevalent as my work has become more refined and focused on line and shape.

By selecting found sources – such as a knot in a tree, a stone, a shadow, a shed window or doorway – I have been developing ideas by pushing these familiar objects into new organic shapes with an existence and life of their own. Introducing microscopic images of plant cells to my source book, I found a similarity between these shapes and structures to the small detail within the landscape, creating a thread of progression in my practice.
Fabricating stainless steel with layers of plywood veneer, found wood and shaped plaster, my focus has been on letting these simple shapes command the space they find themselves in. With an attention to light and shadow the empty spaces created by the works take on a presence of their own and invite the viewer to seek out this space.

As with the delicate balance of nature these cell like shapes, their structure and the materials used reflect both strength and vulnerability, beauty and fragility. The surface of the work and markings made reflecting the scars of time on the geographical and human landscape.
________________________________________
A Constant Promise – new works by Dónal Molloy-Drum
An essay by Anonda Bell, director and chief curator at Paul Robeson Galleries, Newark, New Jersey
The forms seen in this latest body of work by Irish Australian artist Dónal Molloy-Drum might be anything from anywhere. They have a streamlined organic presence which seems to suggest they have emerged from the natural world without actually mimicking any specific specimen. The simplified shapes suggest effortless construction that belies the years of dedicated artistic practice that has preceded their existence. The materials of which the works are composed each has an integral beauty, and a consequent inherent difficulty of manipulation. The wood, plaster and stainless steel appear as essential materials without pretence of trying to be anything other than what they are.
The inevitable passing of time is a recurring theme in the work. The sculptures have an eternal quality, as if having emerged from the subconscious as everlasting forms. The precise nature of linear time is referenced in the clearly visible rings of the wood. The fragility of the environment, and the temporal nature of all life is reiterated through the balancing act where one shape encounters another. It feels as though each of the sculptures could continue to slowly evolve over an extended period, presenting new versions of themselves for years to come. The surfaces of the materials suggest many things without specifically prescribing that the viewer can only see the work in one way. The shimmering surface of pale plaster contrasts with the knots of wood and offers a foil to the buffered shine patina of stainless steel – a material the artist is particularly fond of. The reoccurrence of steel over many years of practice has resulted in a dexterity and appreciation for its capabilities.
Molloy-Drum describes a creative process where the detritus from one series informs the next body of new work. The experience of encountering the sculptures mirrors that of being present in the bush. When one of the abstracted forms comes into focus it triggers an automatic cognitive response to attempt to classify within the viewer’s existing lexicon of the natural world.
Curiosity prompts the viewer to satiate the need for more information by looking both at and through the work. Walking around the sculptures reveals curves, shadows, and the precarious intricacies of intersections. The work operates on both macro and micro levels – possibly being derived from images of microscopic cells to referencing unknowable aspects of the universe. There is a request within the ambiguity of the work which requires it to be experienced over a protracted time frame. The rewards are great – there is a constant promise to continue to reveal new information for the truly committed viewer.