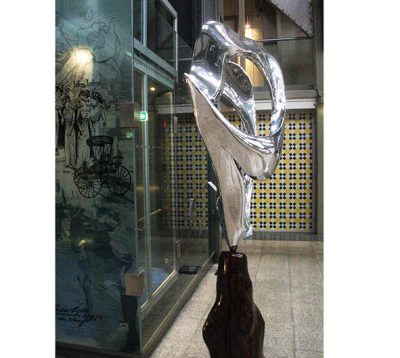 Todd has gained client confidence in several countries throughout the Middle East for his creativity, ability to implement, craft & deliver to the highest quality, large scale projects of a custom nature. In 2009 to 2011 Todd was able to gain a number of commercial sculpture commissions in both Oman & Dubai. In early 2011 Todd returned to reside in Victoria & further explore his passion for sculpture. Sculpture as a medium has become one of Todd’s favorite outlets to freely express his inner creative being without the restrictions that oppose this idea in the commercial world.

I enjoy creating forms that have a desirable mix of emotions. I find that many shapes formed in nature contain this mix of emotions and that I am engaged and inspired by this. Take for example a pebble that has been shaped and polished after years on the floor of a river bed, it contains many compound and soft changing curves but also many different planes of shape. At first glance I feel how nature has constructed an object that is harmonious, balanced & calming with its soft natural asymmetry. There is nothing aggressive or offensive pointing out at me. But then I start to observe a second wave of emotions, where my mind subliminally picks up on all the dynamic energy created from the many hidden angles & planes so cunningly discuses by natures soft curves & organic shaping.

It is by these same principles I believe we can also be inspired to create beautiful objects that bring us feelings of peace & harmony but also subliminally radiate a dynamic uplifting energy which can only be good for us to gain new effectiveness in our lives. I hope through my creations that I also may enhance the environments of others as they subliminally feel the benefits I have described above.

From a distance the construction of many smaller pieces jointed together will cause the form to look solid and whole, but as the onlooker moves closer the form will start to create intrigue for the on looker. Greater detail becomes apparent the closer the observer looks and its semi transparent nature will also become realized. The base being highly organic and of a mirror reflecting finish, will pick up & reflect the very interesting random detail from the top form. The top form is mounted on its base form in a way intended to make the onlooker wonder how it balances itself in a stable manner.

Be the first to review “TS Breakaway” Cancel reply

We're not around right now. But you can send us an email and we'll get back to you, asap.